SAVE THE EARTH, ONE PACK AT A TIME.

The name ‘CAREton’ is a combination of the word ‘CARE’ and ‘CARTON’. The CAREton Project is a Used Beverage Cartons recycling campaign by MILO® UHT and Tetra Pak that transforms drink packs into ‘green’ roofing tiles and panel boards for those in need. It aims to raise awareness on recycling and how it benefits the environment as well as the communities around them. 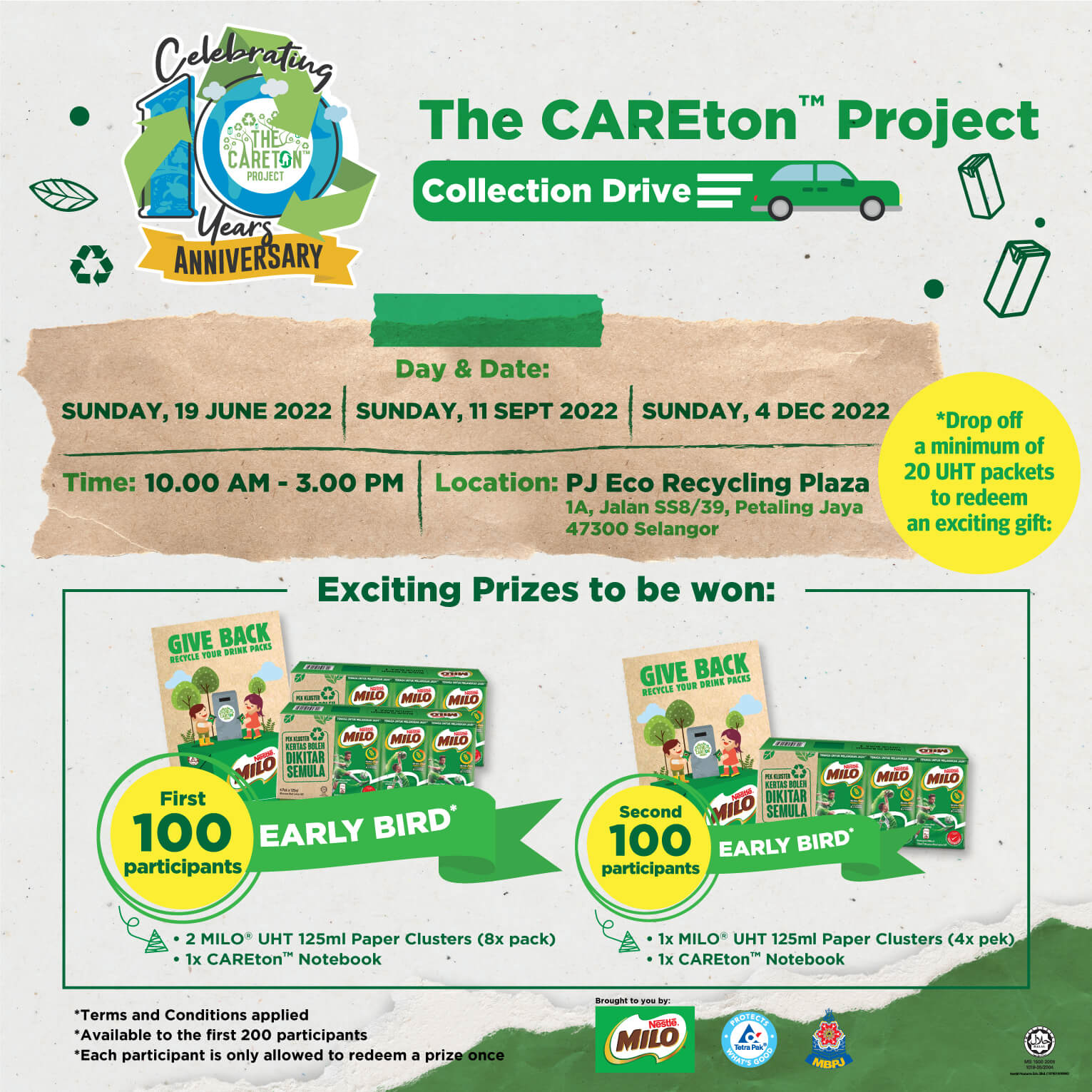 Flip the sides up

Then, send to collection centres!
And that’s how you can help create a greener environment while helping those in need! Easy right? Start today!

Not only do you help create a greener environment, you are helping those in need too. Start today! 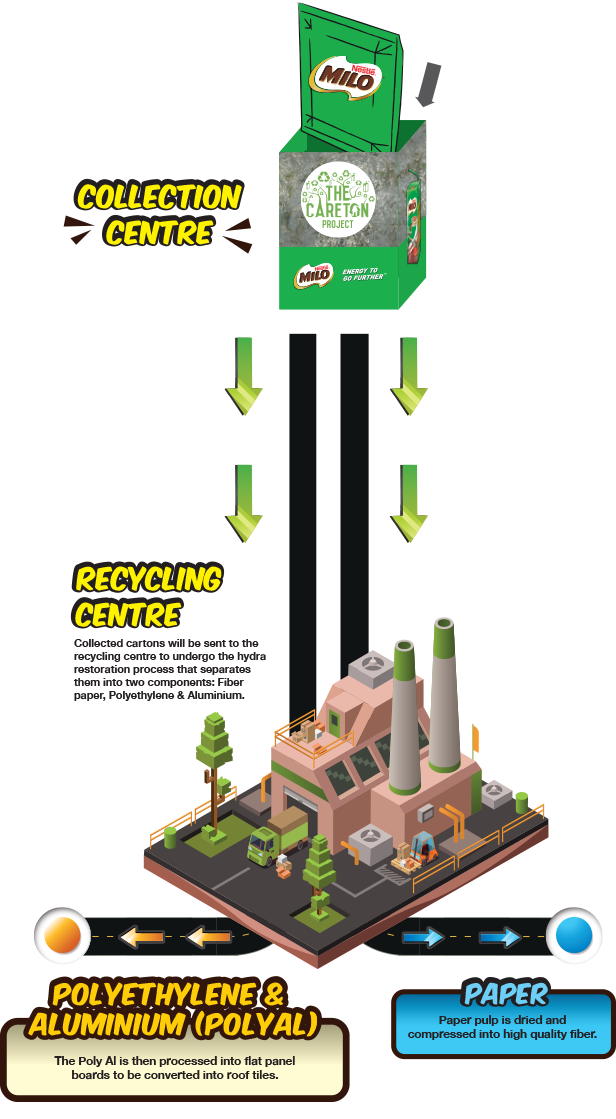 What is the CAREton Project about?

It is a recycling awareness campaign that aims to collect as many used cartons to be recycled into roofs that will be donated to the Orang Asli communities through the collaboration with Epic Homes. We hope that this campaign would be able to promote an environmental friendly society while lending a helping hand to those in need.

How does the CAREton Project work?

All recycled MILO® UHT drink packs will be collected under the CAREton Collection Partners network. Then, the drink packs will be sent to the recycling center to be processed into Poly Aluminium (PolyAl) panel boards and roofing tiles. In the seven years that the CAREton Project has been running, over 60 million drink packs have been collected with enough materials to build 150 homes through beneficiary Epic Homes and other community projects.

How are the used beverage cartons processed into roof tiles?

MILO® UHT drink packs are made up of 75% paper, 20% plastic, and 5% aluminum. All these materials are 100% recyclable. The drink packs will be sent to the SHA Paper Mill where they go through the hydra-pulping process to extract fibre for paper making and the PolyAl component will be sent to KPT Recycle Sdn Bhd to be processed into panel boards and roofing tiles.

How does the Poly Al roof tiles measure up to other commercial roof tiles?

The roofing tiles developed from the recycled MILO® UHT drink packs has a few structural and technical benefits such as having good heat resistance qualities along with good sound proof, water proof and heat insulation.

Why recycle under the CAREton project?

Other than the effort to preserve our environment, the CAREton project aims to aid in providing a roof over the heads for those in need. Join us in our efforts today!

Where can I find the recycling centres for MILO® UHT packs?

Locate a collection centre near you by visiting www.recycle-easy.com.my

How do I join the CAREton Collection Partners program?

It’s really easy! Just fill in the registration form and a representative will get in touch with you to confirm your application. For more information, check out CAREton Collection Partners.

Many people may regard recycling as something small–how can separating, collecting, and sorting out waste make a great difference in the world we live in?
Let’s look at some of the many benefits of recycling and how it can bring a positive impact to our environment.

Imagine all the green outdoor parks, shelters, and public spaces that can be built on acres of lands that are only there to contain our daily waste. Hence, one of the benefits of recycling is that we reduce landfill dependency. By encouraging the public to sort waste properly, recycled items can be repurposed into something else, thereby diverting waste from ending up in landfill.

With less landfill dependency, more land can be utilised into making spaces beneficial for the public use. Hence, promoting recycling can be a first small step to ensure we are able to put our land to a more good use, rather than letting it end up only to hold waste.

Recycling may seem like an overwhelming routine to do, especially when you’re just about to start. Inculcating this habit among the people around you may also be a feat, as it is something that many are not used to doing. But making small steps can be a meaningful start to the world. Begin by participating in The CAREton Project now as a way for you to put recycling as part of your life.